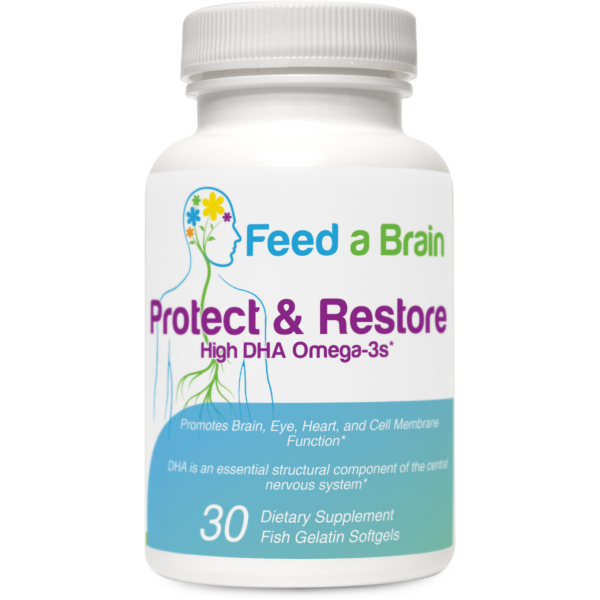 Protect & Restore is a highly concentrated high potency Omega-3 that is especially rich in DHA, an extremely important conditionally essential fatty acid. DHA supports brain, eye, and overall health and well-being. Cavin calls it “the most important brain nutrient.” Cavin was inspired to make the Protect & Restore High DHA Omega-3s to support recovery from brain injury as well as to enhance performance for healthy brains.

Cavin considers DHA to be THE most important nutrient for supporting brain health, which is why he searched far and wide for the best fish oil he could find. Protect and Restore uses a natural enzymatically enhanced MaxSimil® monoglyceride fish oil that has a three times greater absorption rate than an equivalent dose of ethyl ester fish oil.  It is a go to nutrient for healing from any injury or inflammation (TBI, concussion, stroke, migraines, etc…) and also the most supportive and protective supplement anyone can use to preserve and enhance brain plasticity and to support overall brain function.

If this product is out of stock, I recommend Vital Choice DHA Brain Care

DHA is the rarest needed fat that we find in foods, and it is the final stage of the conversion process that Omega-3’s undergo in our bodies. If we can get an optimal amount from diet and/or supplementation, then it takes the pressure off our liver to convert other omega-3’s into DHA.

Much of the research on Omega-3’s show DHA specifically to have the most beneficial effects on memory, and brain health. In the Chicago study (1), a strong neuroprotective effect was observed with DHA that was not seen to the same degree with EPA.

Several studies have also shown that people with Alzheimer’s have severely low levels of DHA in key areas of the brain related to memory formation like the hippocampus (2)(3).

DHA is found in fish oils. The production of fish oil concentrates requires converting the fish oil into a form that can be encapsulated. There are typically two different forms of fish oil supplements:

BUT… you know what’s up to 3x better absorbed than triglyceride (TG) fish oils?

This technology means that the DHA, sourced from cold water fatty fish, has already been pre-digested so that up to 3 times the DHA and EPA is able to be readily absorbed by our cells. One of these per day is a priceless gift to our incredible brain. We ALL need this stuff. It is an honor to share this epic quality product with you!!!