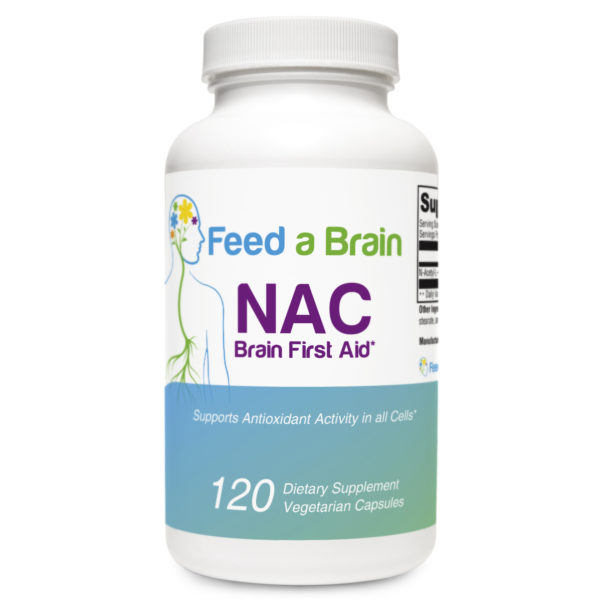 Several studies show the safety and efficacy of NAC for many different conditions including infectious disease, respiratory infection, and… what peaks my interest is that when NAC is given before or immediately after a head injury brain injury, the effects are reduced by up to 78%! [1]

NAC is a conditionally essential amino acid that is absolutely life-saving in certain situations and has been shown to be neuroprotective immediately following brain injury.

It is even approved in large doses (140mg/kg of body weight) by the FDA for acetaminophen toxicity. For this reason, it is often found in most hospitals. [5]

If this product is out of stock, order this from Amazon.

NAC (200mg/kg) provided marked neuroprotection with up to 78% reduction of brain injury in the pre+post-HI treatment group and 41% in the early (0 hour) post-HI treatment group, which was much more pronounced protection than another free radical scavenger, melatonin. Protection by NAC was associated with the following factors: (1) reduced isoprostane activation and nitrotyrosine formation; (2) increased levels of the antioxidants glutathione, thioredoxin-2, and (3) inhibition of caspase-3, calpain, and caspase-1 activation.

NAC (150 mg/kg/day) almost totally eliminated the extensive neuronal loss found in controls both 2 weeks (no treatment 21% loss, NAC 3%, P=0.03) and 2 months after axotomy (no treatment 35% loss, NAC 3%, P=0.002). Glial cell death was reduced (mean number TUNEL positive cells 2 months after axotomy: no treatment 51/ganglion pair, NAC 16/ganglion pair), and mitochondrial architecture was preserved. The effects were less profound when a lower dose was examined (30 mg/kg/day), although significant neuroprotection still occurred. This provides evidence of the importance of mitochondrial dysregulation in axotomy-induced neuronal death in the peripheral nervous system, and suggests that NAC merits investigation in CNS trauma. NAC is already in widespread clinical use for applications outside the nervous system; it therefore has immediate clinical potential in the prevention of primary sensory neuronal death, and has therapeutic potential in other neuropathological systems.

Methods
This study was a randomized double blind, placebo-controlled study that was conducted on active duty service members at a forward deployed field hospital in Iraq. All symptomatic U.S. service members who were exposed to significant ordnance blast and who met the criteria for mTBI were offered participation in the study and 81 individuals agreed to participate. Individuals underwent a baseline evaluation and then were randomly assigned to receive either N-acetyl cysteine (NAC) or placebo for seven days. Each subject was re-evaluated at 3 and 7 days. Outcome measures were the presence of the following sequelae of mTBI: dizziness, hearing loss, headache, memory loss, sleep disturbances, and neurocognitive dysfunction. The resolution of these symptoms seven days after the blast exposure was the main outcome measure in this study. Logistic regression on the outcome of ‘no day 7 symptoms’ indicated that NAC treatment was significantly better than placebo (OR = 3.6, p = 0.006). Secondary analysis revealed subjects receiving NAC within 24 hours of blast had an 86% chance of symptom resolution with no reported side effects versus 42% for those seen early who received placebo

Conclusion
This study, conducted in an active theatre of war, demonstrates that NAC, a safe pharmaceutical countermeasure, has beneficial effects on the severity and resolution of sequelae of blast induced mTBI.

[4] Early, Transient Increase in Complexin I and Complexin II in the Cerebral Cortex following Traumatic Brain Injury Is Attenuated by N-Acetylcysteine

Abstract
… The early, transient increase in the injured cortex was completely blocked by N-acetylcysteine (NAC) administered 5 min following trauma, suggesting an involvement of oxidative stress. Neuronal loss was also reduced in the injured hemisphere with post-TBI NAC treatment. Our findings suggest a dysregulation of both inhibitory and excitatory neurotransmission following traumatic injury that is responsive to antioxidant treatment. These alterations in complexin levels may also play an important role in neuronal cell loss following TBI, and thus contribute to the pathophysiology of cerebral damage following brain injury.

Want to buy in bulk? Go to the Bulk Store: feedabrain.square.site

More information from my mentors:

Why don’t doctors learn and tell their patients about Antiviral Nutrition?
Edited full video now available at: https://www.InflammationMastery.com/antiviral
Digital ebook: https://inflammationmastery-com-ichnfm-org.dpdcart.com/product/192836
Paper book: https://www.amazon.com/dp/1502894890
Articles: https://ichnfm.academia.edu/AlexVasquez
Europe: https://www.bookdepository.com/search?searchTerm=Dr%20Alex%20Vasquez&search=Find+book
———
Copyrighted by author. Usual disclaimers: These books/videos are not personalized medical advice which can only be delivered by a local licenced clinician who has seen and examined the patient, etc.

Be the first to review “Brain First-Aid: NAC (N-Acetyl Cysteine) by Feed a Brain” Cancel reply