Since his severe traumatic brain injury in 2011, Cavin has been studying neuro-rehabilitation like his life depended on it… because it did. Learning and implementing principles of neurology, physiology, nutrition, and medical law has made a huge difference in his recovery. He has since created a podcast, two websites, and published his first book, How To Feed a Brain: Nutrition for Optimal Brain Function and Repair.

While also developing working relationships with medical workers and neurorehabilitation professionals, he has been able to use his experience, knowledge, and connections to support others with neurological injuries. Cavin is now partnering with survivors and loved ones to optimize the quality of care so that they have the best opportunity to recover.

After falling off of a rooftop water tower in 2011, an MRI revealed that he had sustained a type of brain injury called a severe diffuse axonal injury (DAI).

Over 90% of patients with this kind of injury never regain consciousness.

Most of those who do wake up will often remain in a persistent vegetative state.

His recovery journey began after waking from a 12-day coma… before serious complications arose with the need to induce a second coma. In the months following, Cavin continued to work through brain fog, memory loss, and coordination issues with the entire left side of his body. His left hand was also completely flexed inward and his left foot was completely flexed pointing downward.

Cavin did not eat, walk, or talk for months.

He did not know if he’d ever recover enough to lead a “normal life,” but he vowed that if he did get better, he pay his fortune forward. He would dedicate his life to improving neuro-rehabilitation, hospital nutrition, and the general practice of medicine.

As he implemented several treatments, exercises, and therapies, he began to reclaim the mental clarity he had before his injury.

He used this regained clarity to study even more about how he could recover his brain function. And he began to contact practitioners  all over the world to better understand how he could optimize his recovery.

Cavin has navigated the winding roads of recovery, and has been researching the brain like his life depends on it… because it does!

I love my life! I know where I was and how I got from point A to B… even though I felt like I was flying blind a lot of the time. I wish I would have had someone to show me the way, and that is why I am so passionate about this work.

In line with his original vow, he is sharing what he’s learned, offering a light in the dark tunnel of recovery for survivors and their loved ones.

Through his book, podcast, and especially his work with private clients, Cavin educates and empowers survivor’s, loved ones, practitioners, and caregivers to go beyond the standard of care.

Cavin partners with his clients to bring about the best outcome for their families.

His neurotrauma medical advocacy is informed by the knowledge gained through his experience, and a network of practitioners and experts who have become colleagues throughout his own recovery.

Why I Wrote This Book?

While I was in the hospital, 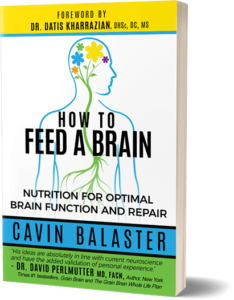 I vowed that if I got better, I would pay my fortune forward.

Since then, I have worked diligently to recover and optimize my neurological function, as well as study the interconnectedness of my injuries and diet. This endeavor has brought me into contact with many specialists researching neuroscience, neurobiology, metabolism, neuronal metabolism, and mechanisms of neuroplasticity.

To share my findings, I first established my website which has put me into contact with other brain injury survivors and their friends and families. For the past few years, I have been meditating on how to make the biggest and most positive impact on the world, and I realized that…

my next moves are to now share the tools that I found to be the most important and effective to recover my brain and body.

The tools I will share are useful for survivors of brain injury, brain disease or other neurological conditions and…

these same tools can help ANYONE to optimize brain function!

This is why I am delighted and honored to share the nutritional tools that I have found to be most effective for optimal brain function and repair.

We all want our brains to have the supplies they need to function optimally, and this book outlines exactly how we can supply the right ingredients for brain function and the right compounds to encourage synaptogenesis for learning, development, and repair.After my injury I explored many different treatments and therapies to best support my brain’s recovery from a severe diffuse axonal injury. I think of building or rebuilding pathways in the brain using an analogy of building a bridge.

We can have the best bridge architects, the most skillful designers, and the most seasoned workers, but…

if we don’t provide the right supplies and tools, the job won’t be done right.

In other words, we can do the best and most targeted therapy, but without quality nutrition, the important connections within the brain are not well established.

There are many beneficial therapies being researched in neuro-rehabilitation, but it is imperative to start with the building blocks. That’s why…

this book is all about how to supply the right building materials to the brain through nutrition.

While I was hospitalized for months,

I was unable to eat, walk, or talk, during which time I was fed through a gastric tube. It was through this tube in which I was receiving processed hospital liquid formula like Boost, Jevity, or Osmolite. These processed liquid formulas contain ingredients that have actually been shown to contribute to inflammation and/or neurodegeneration — ingredients like corn syrup, canola oil, soy protein isolate, etc.! And this is not one candy bar every now and then… this is breakfast, lunch, and dinner for months, even years for some patients!This kind of processed liquid formula is what is typically fed to patients who are not eating conventionally both in the hospital setting and in hospice. So, in effect,…

some people are essentially fed fortified corn syrup every day until they die.

I find this practice to be criminal, which is why a major objective of the book is to influence a positive change in hospital nutrition. I believe that through patient education, empowerment, and demand, we can create that change.

Using the research I have done, the tools I have implemented, and the connections I have made, we can make a positive change in the standard model of neurorehabilitation, and we can help to prevent neurological degeneration for everyone.

I am so passionate about getting this book to anyone with a brain, and ESPECIALLY to those who need it most.

I know the importance of nutrition to brain function and repair first hand, and it excites me that nutrition is finally beginning to get the recognition it deserves when it comes to managing conditions and chronic care. We all have brains and we all eat, so learning exactly…

how to feed our brain for optimized brain function, development, and repair is information that is of great use to us all.

See The Interview Series
Browse The Shop
Schedule a Consultation