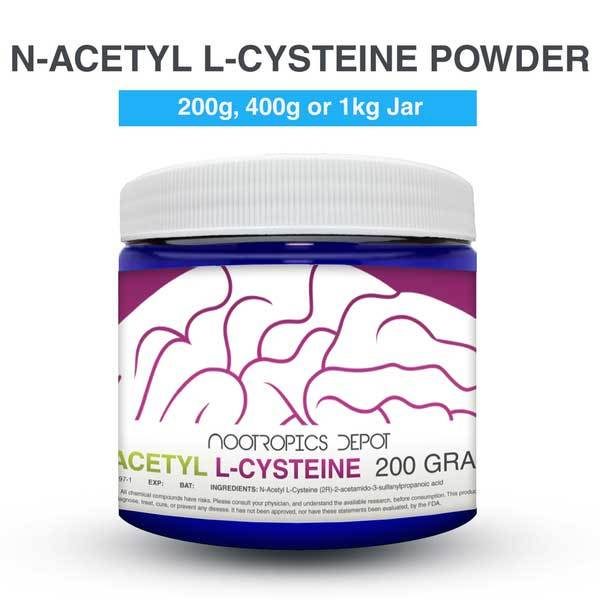 NAC has been shown to facilitate recovery after traumatic brain injury, cerebral ischemia, and in treatment of cerebrovascular vasospasm after subarachnoid hemorrhage.

The powdered form is the most cost-effective way to introduce NAC. Taste can be hidden in sour beverages.
Read our research roundup below.
About the product

Read our Full Article on Reactive Oxygen Species to learn more about NAC and other nutrients and supplements that you can use to support a balance immune response.

NAC (200mg/kg) provided marked neuroprotection with up to 78% reduction of brain injury in the pre+post-HI treatment group and 41% in the early (0 hour) post-HI treatment group, which was much more pronounced protection than another free radical scavenger, melatonin. Protection by NAC was associated with the following factors: (1) reduced isoprostane activation and nitrotyrosine formation; (2) increased levels of the antioxidants glutathione, thioredoxin-2, and (3) inhibition of caspase-3, calpain, and caspase-1 activation.

Introduction
Although N-acetylcysteine (NAC) is widely known as an antidote to acetaminophen overdose, it has multiple other uses supported by varying levels of evidence. These diverse clinical applications are linked to its ability to support the body’s antioxidant and nitric oxide systems during stress, infections, toxic assault, and inflammatory conditions

Pharmacokinetics and side effects

With oral administration, reduced NAC has a terminal half-life of 6.25 h. It is believed to be rapidly metabolized and incorporated onto proteins. After oral ingestion of 200 mg NAC, the free thiol is largely undetectable, and only low levels of oxidized NAC are detectable for several hours after administration (Cotgreave and Moldeus 1987). The data also indicate that the drug is less than 5% bioavailable from the oral formulation. Further pharmacokinetic data suggest that the drug itself does not accumulate in the body, but rather in its oxidized forms and in reduced and oxidized metabolites (Holdiness 1991; Watson and McKinney 1991).
NAC is generally safe and well tolerated even at high doses….

Conclusion
Finally, we review the potential applications of NAC to facilitate recovery after traumatic brain injury, cerebral ischemia, and in treatment of cerebrovascular vasospasm after subarachnoid hemorrhage.

Methods
This study was a randomized double blind, placebo-controlled study that was conducted on active duty service members at a forward deployed field hospital in Iraq. All symptomatic U.S. service members who were exposed to significant ordnance blast and who met the criteria for mTBI were offered participation in the study and 81 individuals agreed to participate. Individuals underwent a baseline evaluation and then were randomly assigned to receive either N-acetyl cysteine (NAC) or placebo for seven days. Each subject was re-evaluated at 3 and 7 days. Outcome measures were the presence of the following sequelae of mTBI: dizziness, hearing loss, headache, memory loss, sleep disturbances, and neurocognitive dysfunction. The resolution of these symptoms seven days after the blast exposure was the main outcome measure in this study. Logistic regression on the outcome of ‘no day 7 symptoms’ indicated that NAC treatment was significantly better than placebo (OR = 3.6, p = 0.006). Secondary analysis revealed subjects receiving NAC within 24 hours of blast had an 86% chance of symptom resolution with no reported side effects versus 42% for those seen early who received placebo
Dosage
The 4 gram loading dose was witnessed and then bottles were name labeled and given to the subject’s corpsman, medic or a nurse (for subjects remaining at TQ). Beginning 18–24 hours after the loading dose, subjects were given 4 grams daily (in two divided doses of 2 gm morning and night) for 4 days. The dose was then reduced to 3 gm daily [in two divided doses of 1.5 gm morning and night]. Every dose was witnessed by a corpsman, medic, nurse, or doctor.
Conclusion
This study, conducted in an active theatre of war, demonstrates that NAC, a safe pharmaceutical countermeasure, has beneficial effects on the severity and resolution of sequelae of blast induced mTBI. This is the first demonstration of an effective short term countermeasure for mTBI. Further work on long term outcomes and the potential use of NAC in civilian mTBI is warranted.

Proposed mechanism of action of N-Acetylcysteine.
The importance of vascular damage in mTBI has been recently emphasized by Franzblau et al [39] as a mechanistic link between traumatic brain injury and the subsequent development of Alzheimer’s Disease. Upregulation of the “Alzheimer’s Disease gene set” after the weight drop model in mice has been recently reported by Tweedie et al [40]. In addition, recent studies by Acosta et al [41] suggest that neuroinflammation associated with traumatic brain injury may suppress hippocampal neurogenesis, with in turn, may underlie some of the cognitive deficits seen in this disorder. The improved clinical outcomes after early NAC treatment for blast TBI [1]are consistent with the hypothesis that vascular effects of TBI facilitate selective delivery of NAC to affected sites.