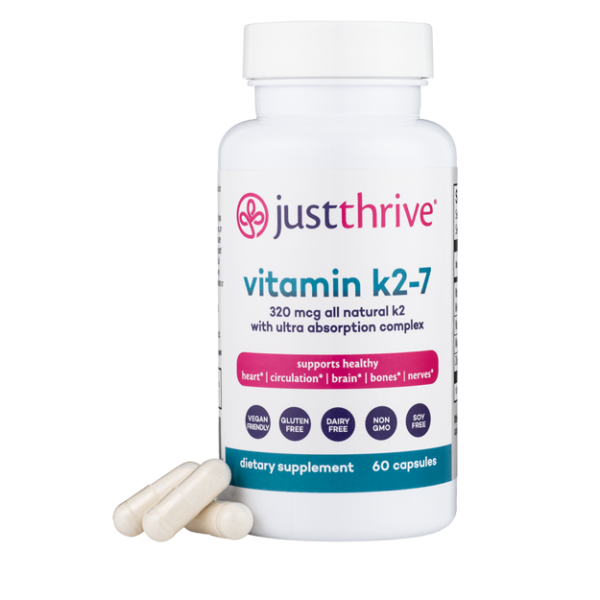 Vitamin K “activates” osteocalcin, the “glue” that holds calcium in the bone. Without “activated” osteocalcin, calcium cannot be properly utilized for bone structure.

Recent studies have shown that “matrix GLA proteins” or MGPs plays a key role in the inhibition of tissue calcification.

Several vitamin K dependent proteins have been discovered during the last 20 years. Among them are matrix Gla proteins or MGPs and growth arrest-specific gene 6 or GAS-6 for short. MGPs are found in bone, cartilage, and vascular smooth muscle cells.

Together, these proteins constitute a new mechanism of local vascular regulation, where the blood vessel defends itself against injury and participates in self-repair. I like that word, self-repair. As with all vitamin K dependent proteins, MGP and GAS6 need to be carboxylated or activated by vitamin K2 to function properly. Speaking about vascular repair, a 2004 report called the Rottingham study looked at 4,807 men and women aged 55 and older. After collecting baseline data they were followed for 10 years looking at measurements of Vitamin K2 just entered my top five supplements along with a mixed EFA oil, prebiotic/probiotic and emulsified vitamin D for daily use. “ ” calcification and death. You can see a link to the right for the study. Their conclusions: When daily consuming 45 mcg of dietary K2, participants had a 50% reduction of arterial calcification, a 50% reduction of cardiovascular death, and a 25% reduction of all-cause mortality as compared to low intake of dietary K2, defined as 12 mcg or less. Let’s not move too fast over those results. Because a study with 4,800 people that produces a 50% reduction in cardiovascular death and a 25% reduction of all-cause mortality is huge. And these benefits come from making sure participants consumed 45 mcg of K2. Can you see why K2 is creeping up on my list of daily supplements? In a Dutch study using a dietary questionnaire over a 10 year period with over 38,000 patients, both forms of vitamin K were associated with a reduced risk of diabetes. However, for every 10 mcg increase of K2, the risk of developing type 2 diabetes was reduced by 7%. As you will see, our goal is 100 mcg so that’s a 70% reduction rate. A study on 23,000 German adults showed higher K2 intake was associated with a lower likelihood of developing and dying of cancer. Vitamin K2 was also shown to reduce prostate cancer risk by 35% in an epic study where 11,319 men took part in the Heidelberg cohort. The results suggested “an inverse association between the intake of menaquinones (K2), but not that of phylloquinone (K1) and prostate cancer. The association was stronger for advanced prostate cancer. Menaquinones from dairy products had a stronger inverse association with advanced prostate cancer than did menaquinones from meat.” Another encouraging study showed that vitamin K2 may be more important than CoQ10 in mitochondrial support. One group of researchers showed K2 acts to reduce a genetic deficiency called PINK1, associated with Parkinson’s disease. The same group showed that vitamin K2 was able to serve as a membrane-bound electron carrier in bacteria, which proved to be superior to CoQ10. These reactions occur within the inner mitochondrial membrane and produce an electrochemical proton gradient that drives ATP synthesis. Of course, more research is needed before we can make definitive statements but the list of accolades for K2 continues to build. Bio-K-Forte Caps from Biotics Research contains both K1 and K2 from the MK-7 family. 1 cap 2 times a day supplies 100 mcg of K2 and 1000 mcg of K1. Natural sources of K2 can be found in fermented foods such as natto from soy, sauerkraut and hard cheeses. Animals have a unique ability to synthesize K2 from K1 that is obtained from grass. So meat or byproducts from pastured animals is best. Butter, beef, egg yolks, fish eggs, chicken breast, ground beef, salami and organ meats like liver, especially from poultry, ducks, geese, chickens, and turkeys provide trace amounts of K2. In terms of dose, 45 mcg gave the impressive results in the Rotterdam study; however, some studies in Japan are using mg doses almost like a drug. K2 stays in the system for 7 days so between K2 made in our gut and dietary K2, supplemental doses ranging from 100-300 mcg should be more than sufficient. We’ll be hearing a lot more about K2 but for now, I’ve

There are 60 capsules in each bottle of Just Thrive Vitamin K2-7. It is ideally recommended to take two capsules daily.

Be the first to review “Just Thrive K2-7” Cancel reply