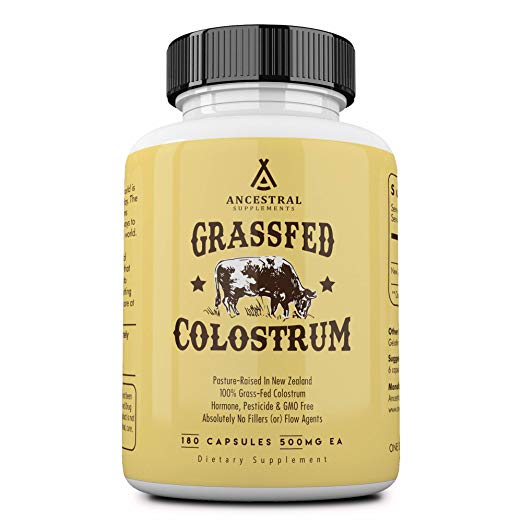 Colostrum is like soil for the seeds of probiotics.

Colostrum For Enhancing The Effectiveness of Probiotics

Because colostrum helps to heal leaky gut and make the tight junctions in your gut less permeable to foreign invaders, without colostrum, probiotics will not be as effective long term because they will pass through your GI tract and not “stick around” in your gut the way they are supposed to. In this way, colostrum is like soil for the seeds of probiotics. It gives friendly bacteria a place to grow by keeping leaky junctions in your gut more “closed”. This has to do with a protein called Zonulin.

This information is from Ben Greenfield Fitness.

In his recent Digestion Session Summit, Sean Croxton interviewed Dr. Datis Kharrazian and in the transcript of the interview, Dr. Kharrazian explained it this way: In addition, since colostrum also contains a large concentration of immune system factors like white blood cells (leukocytes) and antibodies, the combination of probiotics and colostrum together may boost your immune system tremendously.

In addition, if you are trying to re-colonize your GI tract (raise the levels of friendly bacteria in your gut) then you should also combine colostrum with probiotics. When you have a healthy population of friendly bacteria combined with colostrum for the probiotics to cultivate, a more hostile environment is created for harmful microorganisms and there is less space for digestion disruptors to proliferate. So colostrum combined with probiotics can be a very powerful one-two gut-healing combo for gas, bloating, diarrhea, constipation.

Perhaps you have heard of “Proline-Rich Polypeptides” or PRP. These things have been making the news all over scholarly medical research articles lately due to their huge potential for boosting the immune system. So in addition to the infection-fighting immunoglobulins, these PRP’s offer a second level of protection.

PRP’s are tiny immune signaling peptides that have been discovered in colostrum (and also in other sources, such as blood plasma). Also known as “Colostrinin”, “CLN”, and “transfer factor”, they function as signal transducing molecules that have the unique effect of making microadjustments to your immune system, turning your immunity up when the body comes under attack from pathogens or other disease agents, and damping your immune system down when the danger is eliminated or neutralized. This is called cell-mediated immunity and is basically a process of keeping your immune system finely tuned.

For me, athletic performance enhancement and the prevention of gas, nausea, cramps or diarrhea during hard workouts and races was a big reason to begin using colostrum, and I particularly achieve this by “loading” with 8 colostrum capsules per dayfor 2 weeks before hard races – especially races in hot conditions, such as Ironman Hawaii.

A gastroenterologist professor named Raymond Playford, of Plymouth University, has done some very interesting research on the gut benefits of colostrum for athletes, and has published one study entitled: “The nutriceutical, bovine colostrum, truncates the increase in gut permeability caused by heavy exercise in athletes.”

When we are in intense periods of training, us athletes and exercise enthusiasts (you know who you are) often develop gut problems, also known as  “runners’ trots”. If you’ve ever had to pull over on the side of the road during a run with your head between your knees because of gastric distress, or you’ve ever had to interrupt a set in the weight room to quickly duck into the locker room, then you know what I mean.

In the video below, Dr. Playford explains how this is caused by a combination of stress and the simultaneous raising of your body’s core temperature by about two degrees, which increases the permeability of your gut wall, allows toxins into the bloodstream that wouldn’t normally be there, and is the primary reason you get gut distress during stressful exercise, especially stressful exercise in the heat. This is because heat raises the permeability of your gut wall even more.

In this video, Dr. Playfored also talks about his fascinating research on colostrum, its role in protecting this gut leakage that happens during strenuous exercise, and the fact that if you take colostrum for two weeks prior to exercise, the change in gut leakiness is almost completely prevented.

This all makes sense, since colostrum contains growth factors designed to strengthen the gut lining, which is crucial for a newborn mammal, who has a very permeable gut that needs to toughen up fast (and this is why babies or children raised on soy milk – or anyone who has ever been on a bout of gut disrupting antibiotics – should undoubtedly be considering colostrum).

This study also confirms that colostrum may significantly decrease gut permeability in athletes during heavy periods of training and lowers stool concentrations of zonulin.

Of course, it’s not just gut problems that colostrum helps to address in athletes. Other studies show that athletes who take it are as much as 20% less likely to get infections of the upper respiratory tract.

In this article from the Guardian, Playford expounds on the other benefits that active people can derive from colostrum, “It could be really useful to people who have to do physical exercise in hot conditions, such as soldiers in Afghanistan,” he says. “They are susceptible to heatstroke because of all the gear they have to wear and carry, and taking colostrum could reduce that very serious risk. Another group who could benefit are older people with arthritis who develop serious gut problems because of the strong painkillers they use, and those with ulcerative colitis. These patients are at risk of damage to their gut lining and the colostrum helps it to heal and reduces its permeability.” He offers proof of this in his study entitled “Bovine colostrum is a health food supplement which prevents NSAID induced gut damage.”

Colostrum has even been shown to improve athletic performance by reducing gut permeability caused by heavy exercise, improving measures of performance, and supporting lean mass maintenance.

As a final boost for athletes, colostrum also has antioxidant components, such as lactoferrin, which assists with iron absorption, bone density and has been shown to have anti-microbial characteristics and hemopexin, which scavenges the heme released or lost by the turnover of heme proteins such as hemoglobin and thus protects the body from the oxidative damage that free heme can cause. This is especially important for endurance athletes, who have high hemoglobin use and red blood cell turnover.

Colostrum For Growth Hormone (And A Strict Warning!)

Finally, colostrum also contains Insulin-Like Growth Factor-1 (IGF-1). Low IGF-1 levels are not only associated with dementia in the elderly, but people with eating disorders also have low levels of IGF-1 due to malnutrition, as do obese individuals.

IGF-1 also acts as a neurotrophic factor in the brain, which means that it contributes to neurogenesis (growth of new brain cells) and survival of existing neurons (known as a neuroprotective effect).

Now here’s the important part: overexpression of growth hormone by 100 to 1,000-fold in mice causes a 50% shorter lifespan, mainly due to kidney and liver dysfunction. In addition, since IGF-1 and growth hormone are “pro-growth”, excessive long-term use could eventually cause some pretty rapid cell division – which is also known as…cancer.

This information is from Ben Greenfield Fitness.